Delayed Harvest Waters are part of Virginia’s overall Stocked Trout Plan and are regulated from October 1st to May 31st. After May 31st, the water reverts to regular stocked trout waters. Up until this week I had never paid much attention to them on the stocking schedule. They were either too far to drive after work or not near one of the areas I have been exploring for Stocked and Native Trout. 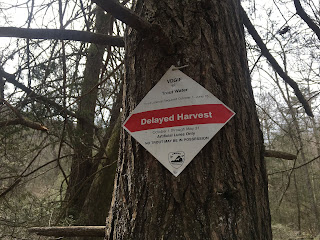 My plan for this weekend had been to strike off to West Virginia and join in the rampage that is the Gold Rush Stocking, but things went awry and my plans had to change. So, with days of vacation already approved I did the logical thing and set the GPS to the nearest Delayed Harvest Water and struck off in the early morning hours prepared for the nearly mile hike in. I arrived at the parking area just as the sun began to rise over the Mountains of the George Washington National Forest.  With my gear situated, I began the one-mile hike to the stream. As I arrived at the first hole my heart sunk. The rocks around the area had bits of powerbait smeared here and there. Why anyone would walk a mile only to break the law baffles me? I hoped that this was not foreshadowing how the rest of my day would go. 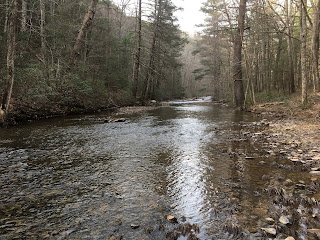 The boot prints began to subside the farther I walked along the stream until I finally found a promising looking log laying out into the river. The log created a perfect little current break that called to me. A fish had to be laying along that break waiting for food to wash down to it. I flipped my fly into a small pocket at the start of the log and began a drift that I’ll probably never be able to reproduce. My little fly danced in the current right along the edge of the log.  A flash of silver grabbed the fly and the indicator dropped. Beads of water seemed to suspend in slow motion as my fly line came taught on the hookset. Now the game began, as the Rainbow realizing that she had been hooked took off upstream. After a few aerobatics and a little pursuit, she came to the net. The power that fish brought to the fight was incredible and the release will be one that never leaves my memory. 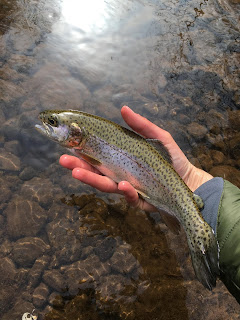 The day ended up being my best day ever behind a fly rod with over fifteen fish to the net. I am extremely grateful for the National Forest and VDGIF for providing such an amazing opportunity to fish for incredible quality stocked fish. 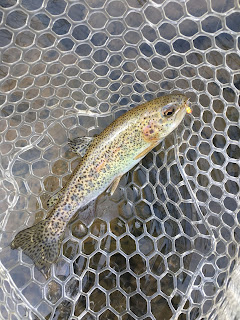